Indexing Social Security: What You Need to Know!

On April 18, 2013 the 'Congressional Budget Office' (CBO) came out with a report entitled,
Using the Chained CPI to Index
Social Security, Other Federal Programs,
and the Tax Code for Inflation

The whole concept of 'chained CPI indexing' assumes that by reducing Social Security payments seniors will buy alternative cheaper items and still be able to afford basic needs. However seniors' needs are different then most other age groups. The chart below represents a comparison over the last 30 years between two methods of calculating the effects of 'Chained CPI indexing. The one doesn't factor in seniors requiring different expense then the rest of the younger population. The other does. About 30% of those over 62 years of age rely on Social Security for 90% of their income while presently 13% of us as a nation are 65 years or older. So this is a big deal.

Overlooked is the elephant in the room. Seniors spend almost three times more on out-of-pocket health costs. Health costs which have risen disproportionately faster then the rest of ordinary inflation. 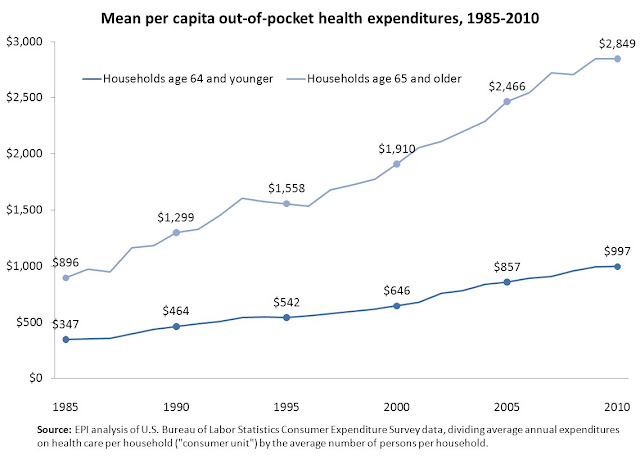 Everyone should readily see that those relying on Social Security for most of their income will not be able to find cheaper alternatives for their current healthcare coverage . Compounding this problem for them are the increasing monthly costs for Medicare and the supplemental plans coupled with ever decreasing Medicare payments to doctors, hospitals, nursing facilities as well as for medications. 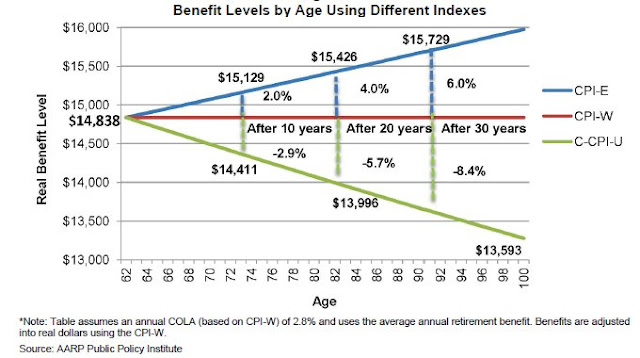 Here's Another Thought. Most seniors spend every dime of their retirement income which puts it right back into the economy. It isn't like they are taking their Social Security check and investing it for sometime in the future. So giving them a couple of bucks more to live on isn't as though the money won't be spent to help keep the economy growing. On the other hand if you take out $339.8 billion in total from changes in the program over the next 10 years, that's $339,800,000,000 less seniors have to pump back into the economy.
* * *

Some Highlights From THE CBO REPORT