At the risk of sounding like a cranky old man.. Friday night was trick or treat night in Allentown.

Every trick or treat night here in the Westend of Allentown we get inundated with trick or treaters. I have no problem with the Halloween handouts. What I do have a problem is the huge numbers of them. There are a total of 4 kids who live in our half block on both sides of the street. So let's say there's as many as 15 more or so kids living to either side of our half block.

How then do you account for all these kids?
Video was taken from one of my surveillance cameras while we were away.
We go to our own kids houses each year for the last five to hand out our treats. One lives in Whitehall Township. The other in Coplay where both their neighborhoods have 10x's as many kids and yet 1/5th the number of trick or treaters. You may ask what accounts for this number of kids and why do we leave?

Well we used to burn through 15 bags of candy in the first hour alone even though we only handed one piece out to each. That's over the top. I've watched SUV's and/or vans pull up and unload 5 or 10 kids. They'd hit the houses, then pile back in the vans and go down to the next block. Then the next.

It's quite obvious downtown parents set about to go hit up the richie's in the Westend. I certainly can't blame parents for wanting to come out here where's it's safer. BUT on the other hand, we can't go through 12 lbs of candy in one hour either. It's taking advantage.

Blame it on the parents, I suppose, but I AM NOT WEALTHY. I AM ON Social Security and so are about 5 of my neighbors. If you will note in the video the guy handing candy out across the street on his front porch ran out about 45 minutes into this (around 6:45 PM).

So no hard feelings, but this is the choice we made for ourselves. It's a shame for the kids who actually do live in our neighborhood. But it does speak to the kind of attitude that seems to pervade in the culture of Allentown, does it not?

Email ThisBlogThis!Share to TwitterShare to FacebookShare to Pinterest
Labels: Allentown

Bolshoi Theater Back In Business 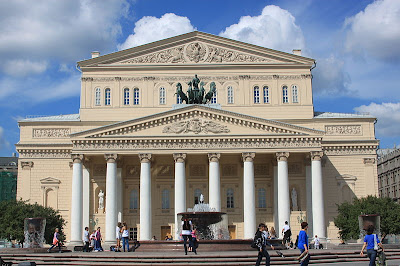 One of the grandest gem of all the theaters in all the world is back in business.
The Boshoi Theatre in Moscow.

The condition of the theatre back on July 2, 2005 was deplorable. It was closed since that time in order to make over 700 million dollars in renovations.


One of the most beautiful of all theaters has been completely restored over the last 6 years and last night (Oct. 28, 2011) had it's grand gala reopening.

The theatre's first performance was on January 18th in 1825. The restored theatre removed a couple of hundred seats in order to expand it's huge stage. All the lightening and audio systems installed are now the latest state of the art.

The creme de crem from all over the world were fortunate enough to bear witness last night for the first gala performance after the completion of the renovations.