According to this article in the Huffington Post a few things the old testament in the bible forbids..

Personally speaking I've questioned whether "The Christian Bible" should include both the old testament with the new. Christianity began with Christ, who claimed to make all things anew.

Therefore how does it make sense for Christianity to include both when one predates the other and is in total opposition?

The God of the new testament is all forgiving and loving of his children
Let's hope all that old testament nonsense is just that. As for me, I'd rather choose to believe in the latter.

Email ThisBlogThis!Share to TwitterShare to FacebookShare to Pinterest
Labels: In My Opinion

Allentown Pools- I Have A Plan

Allentown council not ready to dive right in on approving city pools plan
Randy Kraft | WFMZ.com Reporter
"The cost to close Fountain, turn Irving into a spray park and redo Cedar, Mack and Jordan was estimated at $10 million to $11.3 million, with those projects being done over the next seven years." MY PLAN:If the city is determined to choke up 10 or 11 million dollars, why not just buy qualifying city residents season passes to Dorney Park? The passes are good at both parks and currently cost individuals just over $100. I'm certain the city could negotiate a lower price in bulk. Even at $100 apiece 15,714 passes could be handed out each and every year for the next seven years.
(the intended time stated for completion of the project)
There a number of advantages:I'm not all that hot about spending this kind of money in the first place, but if we're going to do it, might as well make it some place people really want to go. The city's already too heavily invested in the entertainment business. Leave it up to the professionals who do it better.
Anyone else see how few actually use the city's pools?
There's no way the city can compete. Today's population just doesn't sit around pools anymore. They haven't for some time. There'd certainly be less bored people hanging around the streets or the city pools on a hot summer day getting into trouble. People need to be kept occupied (entertained) or they get into trouble. That's a fact. You want to attract new people to Allentown? Want to help lesser fortunate inner city kids? Want to reduce vandalism and nuisance police calls? Want to provide the people a first class recreational area? 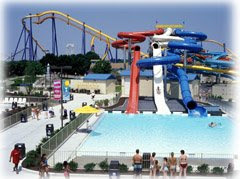 If people object to the $11+ million intended to be spent on city pools, the city should ask themselves, how many folks do you think would still object if the city were to offer season passes to Dorney instead? I'd prefer we didn't spend this kind of money in the first place. But, if the city's so determined as to spend $11+ million, at least spend it on something a far larger number of people could get behind and will actually use. Don't even talk to me about funding not being available for this. We've all seen the magic happen when government planners get something in their heads time and again. Sports complexes, airports, casinos, entertainment venues, public TV construction, trails, private offices, hotels, restaurants and all kinds of other private business developments, etc. etc. etc. If not on this, then let us do none of those either. Those projects benefited a few well connected. At least this plan would actually be spent doing something for the people who benefited little or nothing from those.
Which Would You Rather? The Pool OR...