Airlines Why Do People Put Up With Them!

I've just read another frustrated traveler's story. I can understand mechanical problems and bad weather play a part. The main beef seems to be the lack of communication and the 'I don't give a hoot' kind of attitude airlines have. From my own experience they don't give a flying leap if your ship leaves port without you.

In many instances I see no reason why many take planes in the first place. Passengers are required arrive an hour or two before their flight. In that same amount of time someone could have driven 50 to 100 miles on their own. Assuming a flight isn't delayed and it takes two hours in the air add another 30 minutes at the airport once someone arrives, there's another 250+ miles one could have driven. Plus however long it takes to get to the final destination from the airport. Unless there's heavy traffic or no direct route flying less then 300 or 400 miles is foolish. Air travel is not only expensive but travelers could avoid the presumption of guilt at the TSA screening check points as well as what items they were allowed to take with them. 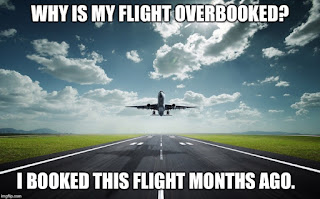 Personal Experience
When we took a plane to Puerto Rico, the couple sitting next to us paid less then 1/2 of what we did. On the return trip we were bumped because of the airline overbooking the flight. This after scheduling our flight 6 months in advance. We already had to wait five hours after leaving the cruise ship we were on. To make matters worse this caused us to miss our connecting flight. Instead of arrived home around 8:00 PM we didn't arrive until near 1:00 AM. This not only inconvenienced us, but our daughter who was suppose to pick us up and had to work the next morning. I wasn't about to pay for parking at the airport for the nearly two weeks we were gone. As a result we never took a cruise since.

If air travelers had chutzpah they'd declare a two day national boycott refusing to fly. This would send a clear message. As long as the American traveling public puts up with being treated like crap airlines will continue treating them as such. Somewhere over the years Americans have lost the kind of unity they once had to coalesce. As a result customer courtesy and respect has become meaningless to airlines and airports on what they both can now get away with.

Who's To Blame?
Passengers accepting cramped seating, lousy meals, being bumped, sitting on runways and air terminals for hours?
OR
Airlines/Airports who know customers will always wait in long lines with wallets open no matter how bad the service?

Here's The Way I Feel
If you don't like the way some business treats it's customers, don't continue using them. It will be a cold day in hell before we fly again the way we were treated. If we decide to book a cruise ship, we'll drive to it's port. OR take a another cruise ship to the final destination cruise ship. Yes it can be done. I see no point in punishing the cruise ship industry for what they do well because of these airlines. Not as though cruise ships are entirely innocent when it comes to differentiating cruise offering$ either !

Email ThisBlogThis!Share to TwitterShare to FacebookShare to Pinterest
Labels: Travel