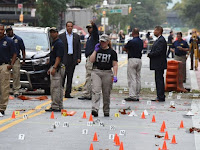 Kudos to all the local law enforcement officers and federal agents regarding Saturday night's bomb explosion in Chelsea New York.

The New York Post (09/19/2016)-- "Authorities were able to link the cell phone to 28-year-old Ahmad Khan Rahami who was wounded in a police shootout in New Jersey Monday morning and taken into custody, sources said."

When this happened I really had great doubts they'd find the person(s) involved. I cannot even begin to imagine with all the millions living in the area how they managed to pin this down in less then 48 hours. This and the culprit(s) behind the bombs found in the train station in a Elizabeth, NJ train station and in Seaside Park, N.J.

This is really amazing investigative work