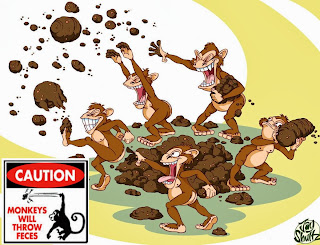 There's so much Bul&*%t going on right now in Washington, D.C. it's enough to make one want to call out a Hazmat team to scrub down the joint!

Most of those on the right loved the idea until Obama put their own brainchild into law. Republicans loved the idea of an "individual mandate", they just don't like it when Democrats succeed in bringing it into law.

Something they either were too lazy or inept to get done themselves.

Either that or they've swung so far to the right they can no longer see an image of their distant former selves because of all the loons in their party right now..

I attribute this current clamor over shutting down the government over Obamacare to ineptness. They've become so crippled by radicals within their own party, they can no longer legislate effectively.

I offer you the following..

Are you sure about that Newt?
Newt in 2008 on the Individual Mandate

Adjusted For Inflation 'Obamcare' does that!

Still not convinced Republicans once supported the 'individual mandate'?
See: "25 Republicans Who Supported Obamacare Before Obama"

The Morning Call (May 02, 1994 by Ann Wlazelek): Candidates Diverge On Health Care Remedies-- "Santorum and Watkins would require individuals to buy health insurance rather than forcing employers to pay for employee benefits..." (Joe Watkins was a Republican contender running against Santorum for U.S. Senate in 1994)

More?
See this article published in the Morning Call on May 28, 1994-- " For several years, Santorum has promoted a Republican alternative. It would require workers to buy their own health insurance.."


Still not convinced the 'individual mandate' wasn't a idea borne in conservative ideology?

Uploaded on Oct 4, 2011
The Heritage Foundation Flip Flop on ObamaCare

The 'Tea Party' has so polluted the Republican party, it's no longer capable of functioning as a unit on the principles it once stood for. Unless conservatives reject the wingnuts within their party, they will remain incapable of legislating effectively. I urge the Republicans to reject 'Tea Party' members within. Why?

Because there is no such thing as a 'Tea Party'!

These radicals declaring themselves to be Republicans are anything but conservatives. They're using the Republican Party to run for office under their banner because the 'Tea Party' is incapable of organizing their own legitimate political party. The sooner Republicans figure out their being gamed, the better it will be for both them and this nation. Historically speaking, I respect the 'Grand Old Party'. What I don't respect is how they allowed themselves to become dupes for what should be a mediocre 3rd party.

I've voted for Republicans in the past. However, the party having allowed infiltration by these loons has demonstrated a lack of leadership and control up to this point. I strongly urge Republicans to take back their party. I want to be able to support them like I did in the past on issues with which I agree. But this whole idea of shutting down the government because of 10 or so radicalized Senate and House members is repellent.

It would be my fondest desire to see Republicans clean out this nest of vipers within. They should realign themselves to support the 'individual mandate' as they once did. Fix the things in 'Obamacare' that are weak or broken. Republicans should be trying to take credit for this instead of trying to sabotage the plan. They should be selling the voters on the idea that they were the original authors of this plan. It was they who were trying to help people rather then letting Democrats control the message. Give me back the party I was once had confidence in. Get rid of the rotten apples!

Email ThisBlogThis!Share to TwitterShare to FacebookShare to Pinterest
Labels: Obamacare