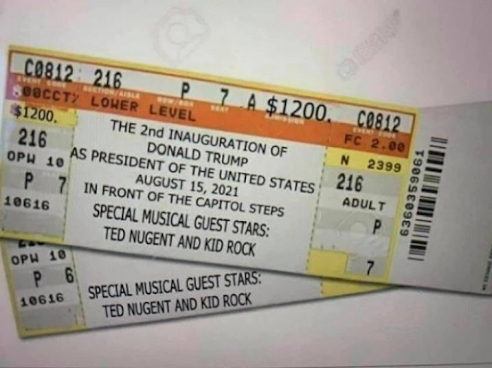 snopes.com
Fake Tickets to Trump’s ‘2nd Inauguration’ Circulate on Social Media
"This is not a genuine photograph of tickets to Trump’s inauguration. This is a doctored image that was created with a blank ticket template.... This picture appears to have been first posted to the internet message board 4chan on June 13. That posting appears to have been made as a joke to mock the idea that Trump would soon be reinstated to the presidency."

They've been turning up on Faecbook and elsewhere. I kinda figure anyone reposting them on their account will wind up in "Facebook Jail". But hey who knows, maybe a few will show up in front of the capitol steps that day anyway :-)
Posted by LVCI at 6/14/2021 02:55:00 PM