Trump Has Little Nice To Say About Our Country

Just yesterday, I held a hearing on the skyrocketing prices of prescription drugs and the financial hardships that families across the nation, and in Baltimore, are facing.

You told me then that you supported the legislation and that you would work with me to make it happen. I took you at your word.https://t.co/bcfyQgXwm4

President Trump tweeted that Rep. Elijah Cummings’ district is a “rodent infested mess” where “no human being would want to live.”

“When he tweets about infestation, it's about black and brown people,” Blackwell says. pic.twitter.com/YFCvPCFhFk

Here's a president who should be calling our elected officials in our troubled American cities and ask what he can do to help make things right. Instead he fritters away his time trash talking every country, place or person that won't kowtow to his ever changing whims. At what point will conservatives of character step forth to reclaim the values of the Republican party by saying enough is enough.

This is no longer about liberal or conservative ideology. Rather it's about whether Nikita Khrushchev's prediction will finally be fulfilled. 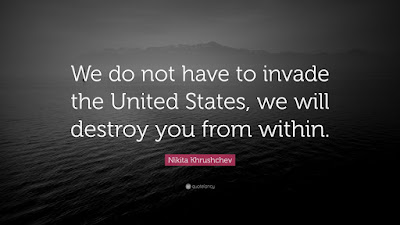